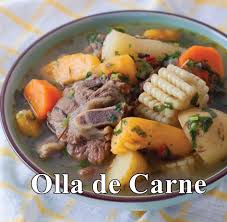 Every nation on earth has its version of a hearty stew-like soup. The Italians have their Minestrone, the French the Pot-au-feu, the Russians Borscht. Costa Rica is no exception. Here it is called Olla de Carne (literally pot of beef). But it is much more than just a simple pot of beef! Olla de Carne is a tasty broth chock full of healthy and filling root vegetables and tender meat.

Ingredients are easy to find and inexpensive, and anyone can prepare it, it’s a breeze. If you can’t handle this recipe below, I recommend just eating out forever. But be warned! Once you try it and make the mistake of telling friends about Olla de Carne you will have to make more. It is a dish for a crowd and if you are lucky there might be leftovers yourself. 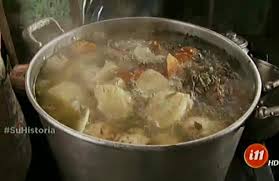 For many years, Olla de Carne was prepared at least once a week in Tico homes, often for Sunday’s lunch. It is practically impossible to prepare in small quantities due to the variety of vegetables called for. It seems to multiply like the proverbial loaves and fishes. So the dish is perfect to share with members of one’s immediate and extended family, and neighbors. If the cook is worried about running short, she (or he) can just add a little more water to the broth and some seasoning and off you go! 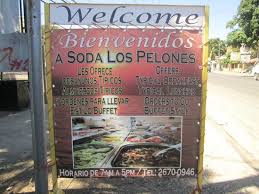 Olla de Carne can be ordered in most sodas (cafes) around the country. Often there is a sign outside advertising the hearty soup. Often, it is served on Saturdays but some sodas have it available every day. I have tried many in the Guanacaste area, and in the San Jose area as well. Hands down, and take this from a retired chef, Soda dos Pelones right here in Playa Del Coco has the best I ever ate. 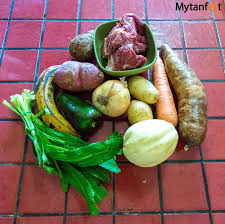 The assortment of root vegetables and it varies from cook to cook can include yuca, tiquisque, camote, chayote, and ayote sazon, a real belly filler. There is also always a piece of corn on the cob as well. It is not the tender sweet corn you eat all summer in North America. It more closely resembles field corn, you know the type they feed livestock, so don’t be disappointed when you try it.

Here is a recipe if you would like to prepare Olla de Carne at home. Feel free to tweak and customize the recipe, or email me and I will give you my recipe—it is not an exact art as if you are baking cakes and pastries, now that’s a science! 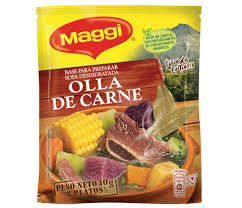 Combine the above ingredients in a large pot of boiling water. Bring to a boil and then lower heat and simmer on low 3-4 hours. When the meat is soft and falling apart, remove the pot from the heat and allow it to cool, usually overnight. The next day, skim the hardened fat from the top (if desired) and bring the broth to a boil. If you do not want to skim the fat, you do not have to cool the broth. Simply keep it boiling and add the following vegetables left whole or cut in large pieces:
1 lb potatoes, peeled
1 ½ lb yuca, peeled
1 lb camote (a type of sweet potato), peeled
1 wedge ayote sazon (cook with shell on) (also known as turban squash)
2 tiquisques (taro root), peeled
2 chayotes, halved but not peeled
2 carrots, peeled and halved
2 ears of corn, shucked and halved
1 ripe plantain, peeled and halved
1 green plantain, peeled and halved
Salt and pepper to taste.

Boil together until vegetables are tender. Before serving, add more chopped cilantro. The reason the vegetables are cooked whole or in large pieces is that the smaller pieces will overcook, get mushy and fall apart, especially when reheated as a leftover. The large chunks of vegetables stay intact during the cooking process and can be cut up before serving so that everyone has at least one piece of each vegetable. 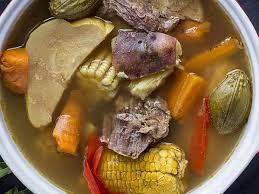 Olla de Carne is usually served in a large bowl, I mean large enough to hold everything with the broth, meat, and vegetables. Rice is served on the side to be added as desired.

As we say in Costa Rica Buen provecho!