What would it be like to live in the clouds? You can experience life in the clouds firsthand by traveling the steep, winding dirt road to the Monteverde Cloud Forest Reserve. 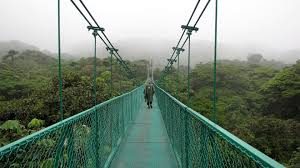 What is a cloud forest? It is a tropical rainforest situated at a high elevation. In Monteverde, the cloud forest blankets a series of mountain peaks, some more than 5,550 ft high. As the northeasterly trade winds from the Caribbean ascend these mountains, the moisture they carry condenses in the coolness. Clouds form and bathe the forest with rain or shroud it in mist, sustaining great bio-diversity in a relatively small area. Dramatic differences in humidity and temperature create Monteverde’s 6 distinct ecological zones in which life flourishes in astounding variety. 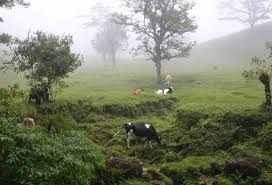 The region was settled in the 1950’s by a group of 44 Quakers, a pacifist religious group also known as the “Friends”. They left their homes in Fairhope, Alabama, U.S.A., and moved to Costa Rica because of their conscientious objection to war. “We chose Costa Rica because of its political and economic stability and because it had abolished its army,” relates Marvin Rockwell, a member of the group. Their search for land that was fertile and relatively inexpensive led them to a mountainous area near the town of Santa Elena. Life in the clouds wasn’t easy for them at first. Rockwell remembers, “The only road up the mountain was an oxcart trail, and we repaired it with picks and shovels so that our jeeps could enter.” An appropriate name was chosen for their new home. “We decided to call the community Monteverde, which means “Green Mountain”, relates Wilford Guindon, a leader of the group.

The settlers made two decisions that would have far-reaching effects. First, they had to decide how to make a living in their isolated farming community. The challenge was to produce a commodity that could withstand the long trip down the mountain and to the market. The solution was cheese. Today, the small cheesemaking operation the Quakers started produces more than 3,400lbs of cheese daily.

The other important decision was to set aside 810 acres of forested mountainside above their homes to protect the water source for their small hydroelectric plant. Soon the rich variety of flora and fauna in the watershed area attracted scientists. In 1972, a group of scientists and local residents founded the Monteverde Cloud Forest Preserve, a wildlife sanctuary that soon thereafter included the watershed. Since then, the Preserve has been extended to encompass approximately 35,000 acres.

Birders and naturalists throng to see the thousands of bird species that make their home in the Monteverde Reserve and surrounding area. 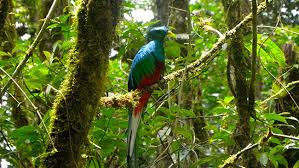 More than 500 species of trees serve as a framework for the ecosystems in the Reserve. Some cling tenaciously to exposed ridges, struggling against the winds that have stunted and gnarled them. Those that grow in protected areas wear a dense robe of epiphytes–herbs, shrubs, vines, or even trees that use other plants as a base. Epiphytes, meaning literally “on top of the plants”, cover about 75 percent of their trunk surface. How can these plants live without being rooted in soil? The Preserve’s Nature Trail Guide explains, “In this very wet environment epiphytes receive plenty of water even without extensive root systems. The mass of vegetation traps enough of the leaf litter being washed down from the canopy to supply nutrients.”

Orchids in abundance add splashes of color to the palette of green. Any remaining space in the landscape is filled with 200 kinds of ferns, some as tall as 40 ft.

Monteverde Cloud Forest is a sanctuary for over 500 bird species and a birdwatcher’s paradise. Native birds range from the resplendent quetzal to the diminutive hummingbird. Many visitors seek the quetzal, considered by some the most spectacular bird in the tropics. Although there are approximately 100 pairs nesting in Monteverde, they can be difficult to spot because their green plumage blends with the verdure of the forest. On the other hand, it would be hard to miss the hummingbirds that frequent the feeders placed outside local shops and restaurants.

One hundred species of mammals call Monteverde home. Its residents include five species of the cat family: jaguar, puma, ocelot, margay, and jaguarundi. The reclusive big cats keep their distance from humans. “A puma is sighted about every six months, and a jaguar is seen only about every three years,” reports Rafael Bolaños, manager of the Preserve. An encounter with one of the 120 species of amphibians and reptiles is much more likely.

What does the future hold for Monteverde? Efforts are being made to expand the protected area. It is hoped that these measures will ensure that there will always be abundant life in the clouds.