It is the first night in your in your home in the hills above Playa Hermosa, Guanacaste, Costa Rica, and you are suddenly awakened at dawn by a roaring, howling sound outside your window. You bolt upright in terror as the crescendo builds. “WHAT IN THE WORLD IS THAT SOUND??”

Meet the mantled howler monkey, or congo as it is called in Spanish. During your stay in Guanacaste there is a good chance they will be your alarm clock in the morning and they will serenade you during sunset cocktails.

You will see howler monkeys in groups of 10-20 traveling through the tree tops or the green monkey bridges that around the town and of course lounging on limbs. Though primarily a black monkey, the howler has a fringe of yellow or golden brown hairs on its flanks—that is his “mantle.” 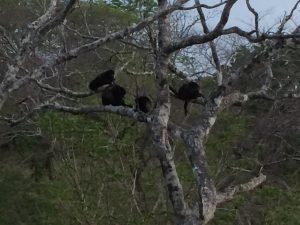 As you watch him, you may think, “That is the life! I want to be a monkey!” And arguably, there are some real attractions to what I will call The Howler Monkey Lifestyle. Let’s consider four major aspects: lethargy, communication via howling, pulling rank, and peeing and pooping on others. Yes, I wrote peeing and pooping on others. The Howler Monkey Lifestyle may become a way of life for you, or just something you adopt until your vacation is over, or until social norms ( or the police) no longer allow it—whichever comes first.

First of all, how do you manage that level of lethargy? The answer: a vegetarian diet! The howler monkey eats mostly the young, tender leaves of trees and the occasional fruit and flower. The low-energy food source makes for a low-energy monkey. Howler monkeys sleep almost 20 hours a day. “Most of the howler’s active period is spent feeding, with only about 4% of the day spent on social interaction,” says the book Primates of the World. I don’t know about you, but that sounds REALLY GOOD to me especially if you are retired. That means, “Honey, bring me another beer” (which is vegetarian!) would be IT for your interactions during any given 24-hour period. A perfect lifestyle, if you could also eat bacon and nice fat burger added in for extra flavor. 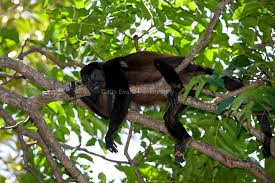 In The Howler Monkey Lifestyle, “Honey, bring me another beer” would be howled. REALLY LOUD. Howler monkeys have a special hollow bone near their vocal chords which acts as an amplifier. Some species of howler monkeys are the world’s loudest mammals (if you discount college football fans), capable of emitting roars up to 140 decibels. The amplified roar allows the monkeys to locate each other without moving around or risking physical confrontation. More on monkeys and confrontation later…

Now, you may think that howling for a beer won’t really work in your…uh…situation, even if you do it REALLY LOUD, but in The Howler Monkey Lifestyle males outrank females, and the youths outrank the older members. Outranking means you get first choice of food and resting sites (“I call dibs on that limb/hammock!”). This ranking system is widely and loudly contested in human society where the rules of survival of the fittest are different. Your mother-in-law, although older and female, will always outrank you, thereby guaranteeing your survival, or at least postponing your demise.

And finally we arrive at the part of The Howler Monkey Lifestyle that many of us consider the most interesting—and probably quite disgusting: peeing and pooping on others. “The howler monkey is usually indifferent to the presence of humans,” says the book The Natural History of Costa Rican Mammals. “However, when it is disturbed by people, it often expresses its irritation by urinating or defecating on them. It can accurately hit its observers despite being high in the trees.” So never stand right under them when taking pictures. How great would it be if you were “disturbed by people” you could ‘express your irritation’ that way! AND be a good shot! NOT, you would end up in jail or even worse. I get that that is not really socially acceptable—nor hygienic—but it would just be a great way to relieve yourself on so many levels, if you get my drift.

As you can see, many—some might say all—aspects of The Howler Monkey Lifestyle are very appealing. Before surprising your family by adopting the lifestyle, there are a couple more facts that you may choose to discuss with them. One is that when young monkeys reach maturity, they “leave home” and “marry” outside the family—worthy of imitation. The other is that when males reach maturity, the scrotum turns white. Just a heads’ up there.

So, the next time you are gazing up at the howler monkeys lounging in the trees above you–“actively” promoting the lifestyle–and you feel a few drops of rain fall out of a cloudless sky, remember: that’s not rain.