“What am I truly seeking in life?”

Have you ever asked yourself that question? Or maybe, you are so busy with day to day life that you are convinced you just don’t have the luxury to think about anything else but work.  Well, it’s time to stop and savor this very moment.

Since time immemorial, we are taught that to be successful, we have to work very hard, the proverbial “work our ***es off.” But nothing could be further from the truth. What we don’t realize is that we are forever stuck in the cycle of living to work when we should be working to live.

The very things we are sacrificing are the things we truly seek — more time, good health, pleasures, and happiness. These are not concepts but realities which comprise a happy life in its purest form.

Ah, yes…pure life! But does it exist?

Yes, it does. And this pure life we seek can be found in Costa Rica.

Costa Rica is a country in which a laid-back, easy-going and slower paced life is the norm rather than the exception.

The Pure Life or “Pura Vida” is what defines the Costa Rican lifestyle. It is an intrinsic part and the essence of Costa Rican culture. It is a way of life void of stress and worries.

Pura Vida is unique to Costa Rica.  Costa Ricans use these two words as a greeting, as an expression of satisfaction, as an assurance, as a reminder or simply as an exclamation.   You will often hear someone say “como estas?” (how are you?) and the reply “Pura Vida!”.  Translation? Good, fine, cool… 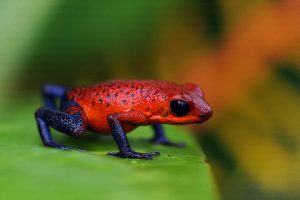 Pura Vida living is a picture of calm, peace, serenity, relaxation, appreciation of what life has to offer while awakening your senses to the beauty surrounding you. It can be as simple as being mesmerized by a brightly-colored Poison Dart Frog, listening to the singing of a Quetzal, feeling the wind on your face while walking along the beach of Guanacaste, or enjoying a sumptuous Ceviche on a hot day at the beach.

The Pura Vida philosophy values the intangibles, and this is where the heart of Costa Rica lies.

No wonder, this tiny Central American republic has been named several times as the Happiest and Most Sustainable Country on Earth, according to the Happy Planet Index, and is regularly among the top 15 Happiest Countries in the World, according to the World Happiness Report.

The Happy Planet Index measures health, happiness, and sustainability. The formula takes into consideration “the well-being and longevity of a population, and how equally these are distributed, with the result set against each country’s ecological footprint.”

This award means that, in Costa Rica, people live longer, happier lives at little or no cost to the environment.

An American investment banker was at the pier of a small coastal Mexican village when a small boat with just one fisherman docked. Inside the small boat were several large yellowfin tuna. The American complimented the Mexican on the quality of his fish and asked how long it took to catch them.

The Mexican replied, “only a little while.”

The American then asked why didn’t he stay out longer and catch more fish?

The Mexican said he had enough to support his family’s immediate needs.

The American then asked, “but what do you do with the rest of your time?”

The Mexican fisherman said, “I sleep late, fish a little, play with my children, take siestas with my wife, Maria, and stroll into the village each evening where I sip wine and play guitar with my amigos. I have a full and busy life.”

The American scoffed. “I have an MBA from Harvard, and can help you,” he said. “You should spend more time fishing, and with the proceeds, buy a bigger boat. With the proceeds from the bigger boat, you could buy several boats, and eventually, you would have a fleet of fishing boats. Instead of selling your catch to a middleman, you could sell directly to the processor, eventually opening up a cannery. You could control the product, processing, and distribution,” he said. “Of course, you would need to leave this small coastal fishing village and move to Mexico City, then Los Angeles, and eventually to New York City, where you will run your expanding enterprise.”

The Mexican fisherman asked, “But, how long will this all take?”

“But what then?” asked the Mexican.

The American laughed and said, “That’s the best part. When the time is right, you would announce an IPO, and sell your company stock to the public and become very rich. You would make millions!”

The American said, “Then you could retire. Move to a small coastal fishing village where you could sleep late, fish a little, play with your kids, take siestas with your wife, and stroll to the village in the evenings where you could sip wine and play guitar with your amigos.”

The truth is we don’t need to “work our ***es off” to achieve something in life. On the contrary, overwork proves to be far more damaging to the quality of our work output, our relationships, our health, and our ultimate success.

After all, we cannot put a price tag on “Pura Vida”.

Many have made the decision to seek the Pura Vida life and retire in Costa Rica.  Have you made yours?

Contributed by Vivian A.