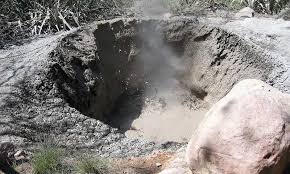 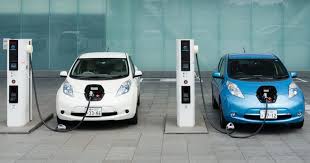 Costa Rica immigration law allows visitors to stay up to 90 days. However, non-residents are required to leave the country at the end of that period. After a brief stay outside Costa Rica’s borders, they are allowed to return for another 90 day period. Some who choose to live in Costa Rica make a run to the Costa Rica Nicaragua border every 3 months for years. These individuals are what the Costa Rica Immigration department calls perpetual tourists. 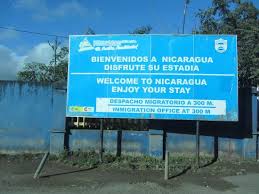 Is this legal? Well, really no, sometimes it is a necessity when waiting for your Costa Rica resident paperwork to be approved by the immigration department. Do I recommend this? Actually NO! If you decide to make Costa Rica your permanent residence, start the process before moving here. If you need assistance email me at JosephEmanuelli@remax.net and I can assist you.
For those that still want to be a perpetual tourist continue reading this step by step guide to the process of crossing the Costa Rica Nicaragua border at Penas Blancas and back on foot. It will get you to the border, tell you what you need to leave Costa Rica and enter Nicaragua and vice versa, all the fees involved, and finally some safety tips.

You can drive your rental car to the border but that is as far as you can go since rental cars are not allowed to cross the border. There is a house right at the border where the family that lives there will watch your car for $3-5 per day. Do not leave any valuables inside.

You can take the Transbasa public bus to the border from Liberia which leaves every 45 minutes 5:00 a.m. to 7:00 p.m. If you are planning to spend a few days in Nicaragua, you can take a Ticabus and you will do the border crossing with the bus. That process will not be described here–you simply follow the instructions given to the passengers.
To cross the Costa Rica Nicaragua border, you will need a valid passport that is not within 6 months of expiring, a receipt of payment of the Costa Rica exit tax, a plane or bus ticket dated at the most 90 days in advance, and small US bills ($1 and $5).
Upon arrival at the border, you must pay an $8 exit tax. All the tax offices are on your right as you face the border and are well-marked by signage.
Walk towards the border, passing by the lines of trucks and vehicles and enter the Costa Rica exit office. There is usually not a lot of people in line. Hand you passport and exit tax receipt to the officer. He may or may not ask you questions, such as where you are staying. 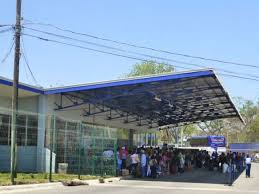 After exiting the office, you will walk a few hundred yards toward the Nicaragua Entrance Office. Along the way you will pass through checkpoints where they will check for the Costa Rican exit stamp in your passport. The officers are generally friendly–don’t be frightened! Continue to follow the signs leading you to the Nicaraguan Immigration office, a modern white office building. You will pass buy lots of vendors and persons offering to “help”; it is best to just keep walking. DO NOT USE their “service” as it is illegal and the stamps you get could be bogus.

After entering the air-conditioned immigration office, you will need to pay a $12 tax to the immigration officer who takes your passport. After stamping it, you will receive a receipt for safe-keeping. He will ask you where you are staying in Nicaragua. Your bags will be put through a scanner and, after collecting them, you are officially in Nicaragua! Outside the building there are restaurants, taxis, and a bus stop.

Costa Rica requires you to be outside the country 72 hours in order to re-enter with duty free items, as you are allowed up to $500.00 duty free every six months. If you’re just getting a passport stamp for another 90-day tourist visa, you just may want to go to lunch and return. San Juan del Sur is only a 30-minute cab ride and should not cost more than $35.00, so this is a good time to get to know our neighbor to the north. Other popular destinations are colonial Granada, or metropolitan Managua, even Lake Nicaragua. 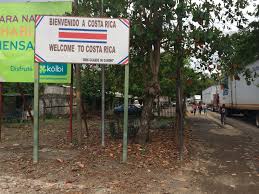 To re-enter Costa Rica, the process is basically the same, just reversed. Upon entering the Nicaraguan immigration office, you will pay a $1 municipality tax at a small booth on your right, and then $2 to the exit officer who checks your passport. Once again you walk along the main road towards the Costa Rica Nicaragua border, and once again there will be checkpoints. Enter the right side of the Costa Rica Immigration office and prepare to stand in line anywhere from 20 minutes to 3 hours (if there are big bus groups). When you get to the window, you will need to present a plane or bus ticket that shows you will be leaving Costa Rica within 90 days. If you do not have either, you can buy a bus ticket to Nicaragua for about $25 at a booth nearby. Upon being shown proof of departure, the officer will stamp your passport. Before leaving the window, make sure the stamp says 90 days. Then retrieve your luggage after it has been sent through the scanner and Bienvenido! You are back in Costa Rica for another 3 months!

A few words of caution are in order. You will be approached by persons offering to help you, some even say they will do it for free. Of course, it will never be for free. This is not a complicated process. You are completely capable of doing it yourself, and no one can streamline it for you any more than it already is. NEVER give your passport to someone. A few people may be making an honest living “helping out”, but there are many scams and con artists out there, and you cannot possibly know which is which (they don’t wear signs). So just view the process as an adventure and enjoy! If you are traveling alone, join up with others going through, as there is often more ‘safety in numbers.” 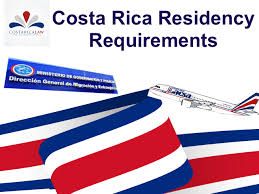 Or you can avoid all these headaches every 3 month and just apply for your residency. There are many benefits to it. Contact me if you would like more information.