Snakes in Costa Rica–just the thought strikes fear into the hearts of adventurous travelers.  Few words curdle your blood like the word “snakebite.” It makes me shudder and my skin prickle. “Isn’t the rain forest crawling with snakes?” you wonder as you subconsciously pull your arms closer to your core. “Will I be bitten by a poisonous snake during my visit to Costa Rica?” 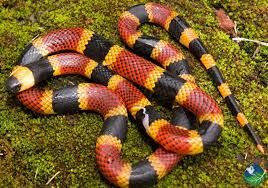 There are about 140 species of snakes in Costa Rica, but only 23 of those are venomous. According to the Clodomiro Picado Institute founded in 1970, a leader in snakebite research, the country has at least 2 deadly snakes per 2½ acres. That sounds like a lot—even too many—but death by snakebite is extremely rare. About 500-600 people are treated for snakebites each year. Of those, only 1 or 2 die because, in most cases, the snake that bit was not poisonous. 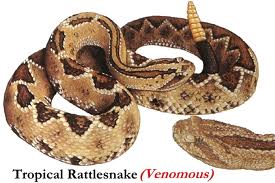 To put that statistic into perspective, one person each year is killed by lightning in Costa Rica. I am sure you were not thinking of avoiding Costa Rica for fear of a lightning strike! If that were your vacation-destination criteria, you would avoid Mexico, which has 223 lightening-related deaths per year, or Florida for that matter as they receive thousands of lighting strikes a year. To be brutally honest, it is far more likely to die in a traffic accident than from the bite of a snake in Costa Rica. There were 676 road fatalities last year.

But you are thinking, “If I drive carefully and defensively, I greatly reduce my chance of dying in a traffic accident. But snakes are tricky and there’s no way to protect myself from them striking me with their fangs dripping with venom!”

Wrong. Despite their sinister public image, snakes are almost always more scared of you than you are of them, if you can imagine that. Most snakes are not aggressive toward humans without provocation, unlike your fellow drivers. So, that’s easy enough: Don’t provoke a snake if you see one, and he won’t attack you.

Although snakes are meat eaters, they do not have a taste for human meat and we are WAY TOO BIG a portion size for them. Their tastes run toward insects, birds, small mammals (rodents) and other reptiles. 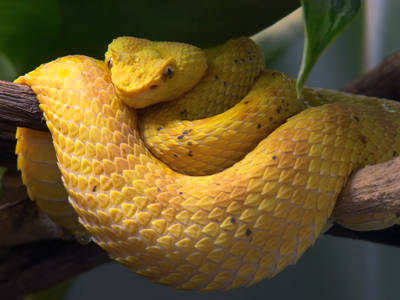 While most fatal snakebites happen in the northwest part of Costa Rica, the victims are almost always farmers and field workers who are out stirring up the snake’s habitat by cutting brush or sugarcane. If you happen to be thinking of owning a place in Costa Rica or are thinking of coming here, here are a few precautions to use if you decide to go off the beaten path:

1) Most bites occur on the feet or legs when the person accidentally steps over these animals. So always use closed shoes (like boots).

2) Do not explore inside hollow trees, under rocks or fallen branches with your hands or feet. Instead, use a stick or weeds if you MUST poke around.

3) If you are working in your garden at your home REFER BACK to #2 and use a tool.

4) Be careful picking fruit as some snakes like to hang out in trees.

5) Just be aware of your surroundings and be smart about it.

If you do manage against all odds to get bit by a snake, here are some things NOT to do:

* Do not cut the site of the bite and suck out the venom with your mouth like you see in the movies. That seems obvious.
* Do not make a tourniquet which stops blood flow and could cause damage to the muscle tissue.
* Do not place cold compresses on the bite.
* Do not administer alcoholic beverages (even though you have never wanted a drink quite so badly!) 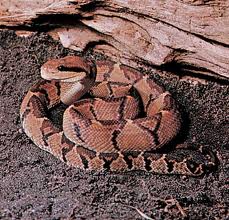 It is not necessary to take the snake to the hospital to be identified. Costa Rica has a comprehensive supply of anti-venom in every community and the healthcare professionals are trained how to discern which type is needed.

Chances are that will not even see a snake during your visit to Costa Rica. But if you do, just give it a wide birth. People tend to kill first and ask questions later. But snakes belong to an intact ecosystem and play an important role in controlling other animal populations. “Live and let live” is a good rule to live by in general, but especially when it comes to snakes in Costa Rica.

The Costa Rica water infrastructure is about to improve.  If you have ever spent any time in Guanacaste, Costa Rica or read about it, you may have heard of it’s water distribution issues. Well, in time that will all be over as the government of Costa Rica signed a $425 million loan agreement to end the water issues of Guanacaste. 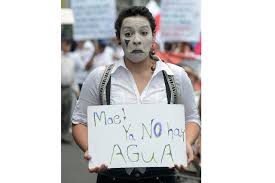 Now having said this, the loan needs to be finally approved by the legislature in order to be utilized. The new President of Costa Rica, Don Carlos Alvarado, stated that this was the largest loan ever granted to Costa Rica from the Central American Bank for Economic Integration.  The loan is to help develop the proposed “Agua para Guanacaste” project which is designed to deliver potable water to many areas of the Guanacaste province that do not have the infrastructure or really old and inadequate infrastructure.
This new project will be designed to supply potable water to the counties of Nicoya, Santa Cruz and Carrillo. All the towns of the Papagayo region are in the county of Carrillo. 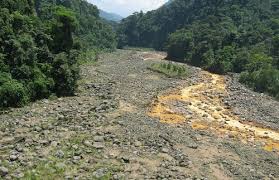 What’s included in this major upgrade to the Costa Rica water system?  The “Agua para Guanacaste” Project will entail a reservoir located on the Piedras River just east of the town of Filadelphia, the county seat of Carrillo ( for all the English majors that like to be critical of other’s writing, this is the correct spelling of the town!). The reservoir height is anticipated to be no more than 40 meters or 131 feet tall. 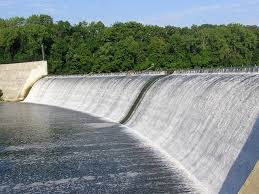 In the Playa Hermosa, Playa Panama and Playas del Coco area, we have been struggling with it for years. Not that there is a lack of water, which you read all over the place, but rather a lack of the infrastructure to deliver it and very poor management of the wells and water that supply the area. Heck, when a country gets as much rain as Costa Rica does, there should never be a shortage. Yes, there have been a few times I was without water, but only for a few hours.  At most it was a half a day.

The good news is that the problems that were experienced in the past in the Papagayo region will be rectified shortly. Over a year and a half ago, the previous president, Luis Solis, declared a national emergency for the area and pushed forth the drilling of new wells and infrastructure. 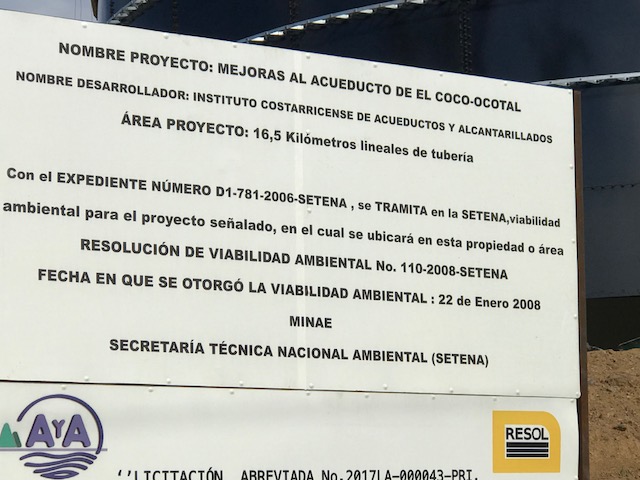 Two new huge water tanks are already under construction:  one in Playa Panama close to the development of Hacienda del Mar and the second on the right on top of the ridge east of Playa del Coco. All the main water lines have already been laid, new wells drilled, and old ones repaired. This process started over a year ago. Hopefully, within the next two months this expansion of the Costa Rica water system will be fully operational. 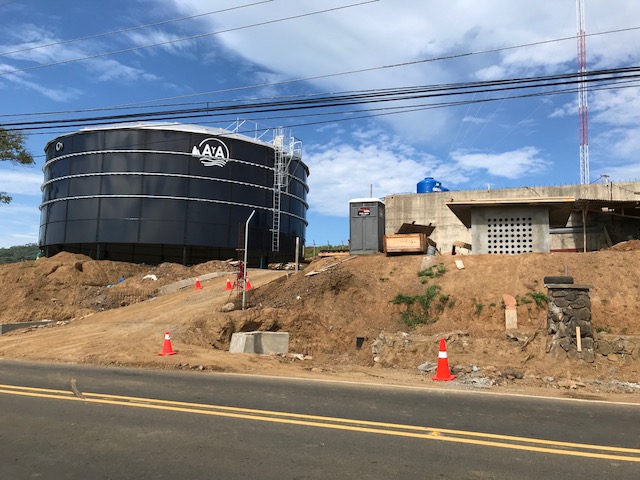 When someone tells you that Guanacaste has no water, tell them to take a swim in the pool or chill out with a tall glass of water! 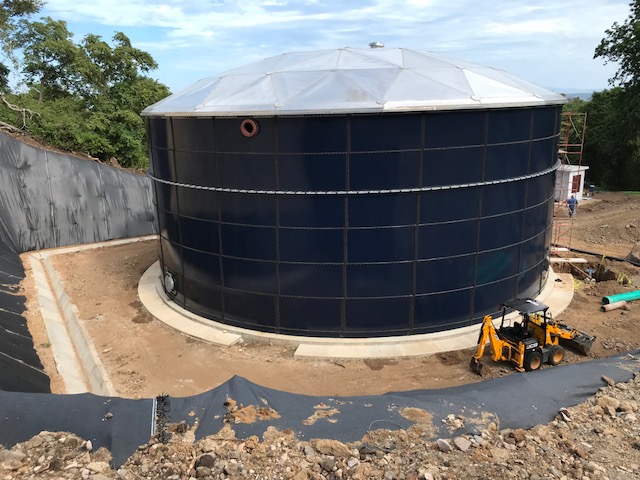